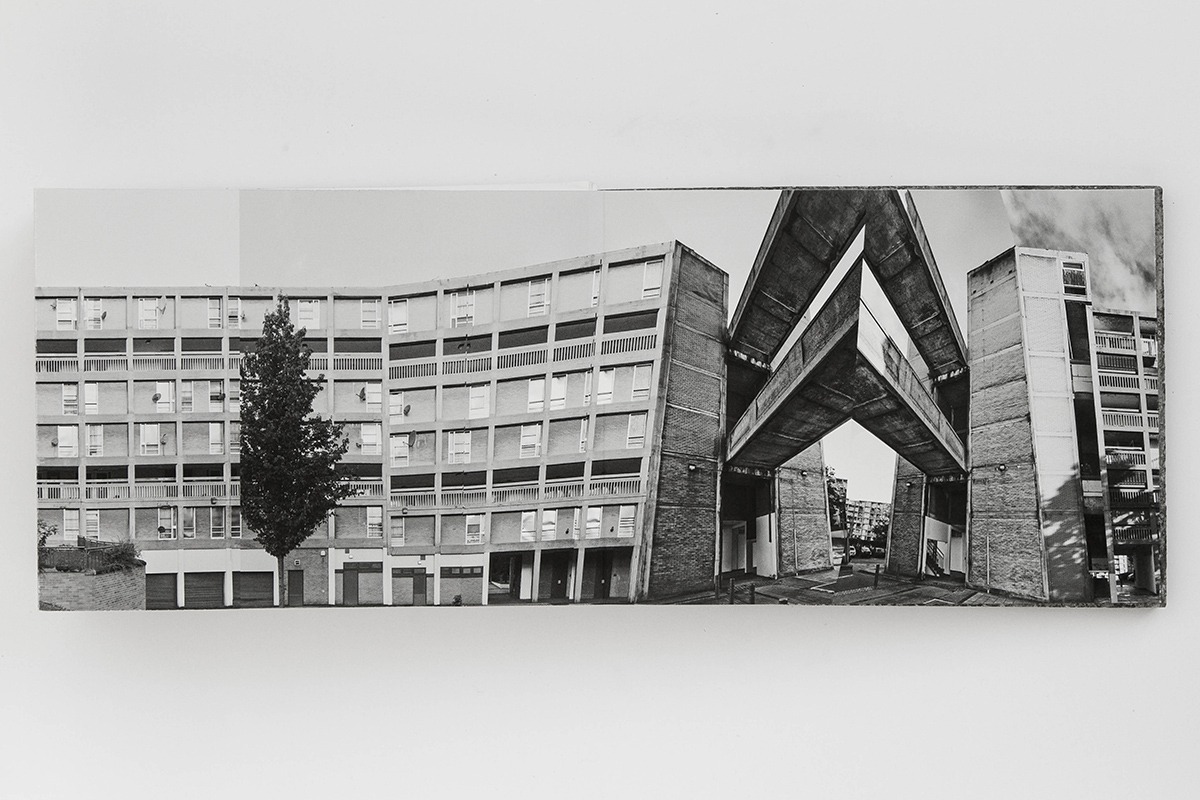 Using experimental publishing and, more specifically, the format of the artist’s book, the “site projects” are attempts at exploring three specific sites as nexus where materialities and historical, socio-discursive formations and trajectories meet creating significant cultural and political meaning and opening up to, at times conflicting, forms of commemoration and forgetting, demarcation and erasure, use and counter-use. Drawing upon physical and material encounters with and within these sites, the projects gather archives; documentary and semi-fictitious; quoted, reworked, reconstructed, created anew; in and across media and forms of expression. The projects, each in its specific way, thus work as documentary forms of commemoration of a site and an encounter with a site, and as processes of fictioning and fashioning premised on those encounters but entrenched within trajectories and temporalities distinctly futural.

The Brutalist council housing complex Park Hill is located on a hill in the center of Sheffield. It was built between the years 1957 and -61 and has since been the subject of several discussions and political debates. In their artist book 23500T (2012), Ola Ståhl and Terje Östling draws a both performative and historical portrait of the building. The images lead viewers around the large residential complex, while the texts are, in part, taken from the city’s archives. The tone of the texts from the early 1960s are full of hope, whereas in 1970s they become increasingly dystopian, focusing on social issues. At the moment, the complex is undergoing privatization, and the tone of the texts are once again shifting towards an optimism; a neo-liberal market-oriented language can be noted: “The successful refurbishment of Park Hill will be a major boost to the regeneration of Sheffield, creating employment, space for commercial growth, and live / work commission close to the heart of the city”. 23,500T is a both implicit and explicit discussion of architecture, materiality and gentrification. And the building itself becomes a symbol of social and economic challenges, applicable to the modern city in general.

Andreas Nilsson, curator, the Museum of Modern Art in Malmö, 2014

You can download pdf-versions of the photo- and text collages here, please note that the files are very large:

At Moderna Museet 23,500T was shown on a plinth system designed with Patrik Bengtsson.

In 2015, 23,500T and the accompanying plinth system was used for a smaller installation of the project at KIM? in Riga, Latvia.

23,500T has previously also been shown as a performance at Malmö University involving a revolving slideshow and a reading of parts of the text. The performance was followed by a discussion and a short interview.

Ola Ståhl’s project “Eftersläckning” consists of an artist book of thirty-nine volumes accompanied by a series of short pieces of writing. Taking as its point of departure, the Finnish Civil War and, in particular, the so-called White Terror and the detention camps run by White Guards across Finland during and after the Civil War, the thirty-nine volumes seek to address issues around historiography and commemoration. Each page in the volumes represent one victim of the White Terror; that is, one person executed or murdered by white guards, or one person dead from starvation or disease in the detention camps.

The origins of the project dates back to a residency period Ståhl spent at Helsinki International Artist Program, located, partly, in the former army barracks at Suomenlinna in the Helsinki archipelago. At HIAP / Suomenlinna, the buildings used as living quarters and studios for visiting artists are adjacent to one of the main tourist attractions in Finland – the most picturesque part of the island group with bars, cafés, restaurants, small harbours and other attractions. However, the surrounding barracks also formed part of the White Terror system of detention camps in which approximately 8,000 members and suspected sympathizers of the Red Guard were interned. Apart from Marja Kanervo’s beautiful memorial plaque, subtly and poetically located near the harbour of the main island, there is little at Suomenlinna, part of which is still run by the Finish military, to commemorate this particular part of its history; a phenomenon which is, arguably, often the case in popular accounts of this historical period, celebratory in tone of the events as constitutive of the modern Finish state.

The volumes that together compound Eftersläckning are bound in such way that they cannot be opened without being destroyed. You can see the bulk of pages in each book, sense their volume, their presence as a physical mass, but being glued at both margins, they would have to be destroyed as objects were they to be opened as conventional books. They are, in a sense, reduced to their material components: paper and glue. They remain a set of books, but they are also, and at the same time, something other than that; an abstract, material mass, a set of objects with a commemorative function, something akin to a monument of sorts. As such commemorative objects, however, they do not seek to unravel hidden histories – these are already well-documented and debated – but instead raise questions around commemoration in general, the act of engendering dominant historical narratives while erasing others from public discourse, potentially narrowing down the possibilities for serious conversations around complex socio-political and cultural histories and the ways in which they shape our sense of ourselves and our position and agency in the world.

The texts accompanying the bound volumes, footnotes of sorts, are printed on semi-transparent tracing paper and take the form of journal entries compiled by Ståhl during a residency period at Platform in Vaasa. The notes move between and weave together citations from newspaper articles, media reportage, philosophy, history and critical literature, fiction and poetry, personal reflections and biographical events, providing a context for the work and placing the atrocities of the time within the general context of the detention camp, the state of exception and the historical foundation of the modern, capitalist state and its contemporary developments.

The Atlantic Wall is a defense structure spanning across France, Belgium, Holland, Germany, Denmark and Norway, thus covering most of the Atlantic coast in Europe. Dating back to the Second World War, it was built by the German Nazi regime to protect occupied territory from allied invasion. In 1943, during the German occupation of Denmark, work began on the Danish stretch of the Atlantic Wall. Danish construction companies and Danish labourers were hired en masse to ensure as swift a construction as possible of the bunkers, depots, radar towers, etc. that came to populate the designated stretch of land. Although at the end of the war, the extension of the defense structure into Denmark and Norway had yet to be completed, this massive construction project left much of the Atlantic coast in Europe in Denmark scattered with concrete bunkers and other similar structures. Difficult to blow up or even to conceal, many of these structures are now left on beaches, increasingly sinking into the sand with erosion, and in groves, parks and woodlands in and around coastal cities and towns, where they offer both an interesting, often redundant and derelict yet fairly versatile, architectural space and an eerie reminder of a historical trauma involving and intertwining military occupation and ambiguously ‘pragmatic’ collaboration policies.

Taking the dual perspective offered by the bunker as a physical structure – its hollow interior and the vantage point of its flat roof – as a point of departure, Concrete, & The Smear sets out to develop a text premised on three different trajectories or positions of writing: First, the enclosed, hollow receptacle of the bunker structure itself is pursued in a text that departs from the physical structure and sets off to explore a wide range of images of such receptacle like spaces in philosophy and literature (Plato’s concept of the Chora, for instance, later picked up on by Kristeva and Derrida; Deleuze & Guattari’s notion of a smooth space as well as that of a Body without Organs; Johan Jönson’s continuous reference to actual bunkers in Restaktivitet; Ulrike Meinhof’s notes so vividly describing the bunker-like conditions in Stammheim, etc.). Second, the cartographical perspective offered by the vantage point of the flat roof of the bunker is explored in terms of aggregates of lines constructed between bunkers, worked through in the text in the form of inventories, lists, references to archival material related to German military and strategic concerns, the actual construction work, and the visits and reports of Danish and allied officials to the sites following the German defeat. Third, the often derelict structures that now remain is engaged with choreographically, as stages for movement (walking between and climbing bunkers, entering and exploring bunkers, etc.), and as structures with very specific affective and acoustic properties.

The tripartite text assemblage thus composed has been used to produce an audio collage taking as its point of departure a series of live recordings of the texts being performed on top of and within bunker structures around Blåvand, near the Dainsh city Esbjerg. These recordings, which includes also the ‘natural’ sound environments around and the acoustical properties of the bunkers, have been edited, remixed and modified in different ways in sound collages used for sound installations exhibited at Esbjergs Kunstmuseum, Denmark, in 2008. In 2009 and additional remix, featuring recordings made at bunker structures in the Swedish regions Österlen and Bjärehalvön, was created for an exhibition at NEON Gallery in Brösarp, Sweden, and in 2010 additional field recordings from bunker complexes in the Marin Headlands, California, USA, was incorporated into the project. Later the same year, part of the project was featured in a sound art program curated by SoundFjord for Swedish Dragonfly Festival and on the CD release Alternating Current (London, SoundFjord, SF001). A final installment of the project took the form of an artist’s book produced for the exhibition Drift of Summer at RM Gallery and Projects, Auckland, New Zealand (2011).

Concrete, & The Smear from Ola Ståhl on Vimeo.